Do Not Turn Away—Then and Now 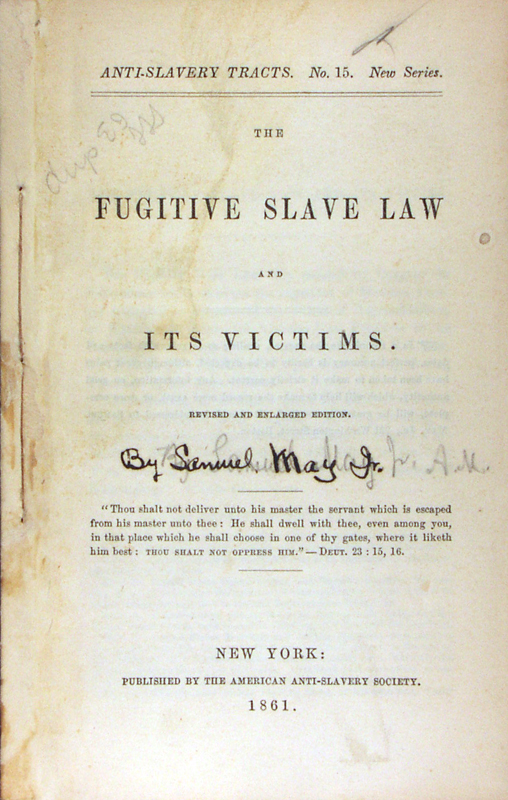 In 1861, as a great conflagration spread across our nation, the Bostonian abolitionist and women’s rights advocate Samuel Joseph May published a slender tract entitled The Fugitive Slave Act and Its Victims, an impassioned polemic against the Fugitive Slave Act of 1850. This federal law, born of the Missouri Compromise of the same year, required all federal, state, and local authorities, including those in free states, to return fugitive slaves to their masters, while also criminalizing any attempt to aid and abet a slave seeking to escape bondage. May, a Unitarian pastor, thought it fitting—and rightly so—to grace the tract’s title page with the King James translation of Deuteronomy 23:16–17, which I cite here using the JPS translation: “You shall not turn over to his master a slave who seeks refuge with you from his master. He shall live with you in any place that he may choose among the settlements in your midst, wherever he pleases; you must not ill-treat him.”

May presumably read these verses as a condemnation of the institution of slavery as a whole. However, the fact that slaves are to be freed only in a particular instance implies a general recognition of a right to own slaves (though, according to Leviticus, Israelites were limited to only enslaving non-Israelites, as discussed below).

To what circumstance are these verses referring? There is general agreement among rabbinic, medieval, and modern commentators that the verses refer to a slave who has fled from a neighboring kingdom and is seeking refuge in Israelite territory.

There is textual evidence to support this claim, particularly in verse 17. Both the content and the language of this verse are reminiscent of statements found elsewhere in Deuteronomy concerning the ger, a sojourner who seeks to settle among the people of Israel, and the ill treatment of gerim is explicitly proscribed elsewhere in the Torah. The point, then, is that this refugee is given the status of a freeman, and he is to enjoy all the rights and protections afforded to the ger.

What would be the rationale behind granting such slaves asylum? Indeed, contemporary scholars find this law particularly striking because it breaks with the consensus of Israel’s neighbors. Contemporaneous Near Eastern codes often refer to extradition treaties requiring rulers to return each other’s fugitive slaves. Against this background one might see the prohibition against rendition as an assertion of political sovereignty, but it seems unlikely that this would be its sole or even major motivation.

Rabbinic tradition explains that the Torah’s concern is to prevent gentile slaves from returning to their place of origin and again serving their gentile masters: once they are in Eretz Yisrael and have the opportunity to serve the God of Israel, one is forbidden to return them to the idolatrous practices of their native land. According to one view in the Talmud, even a slave serving a Jewish master in the Diaspora who flees to Eretz Yisrael is to be granted asylum so that he not be returned to a land filled with idolatry (BT Gittin 45a).

The medieval Spanish commentator Nahmanides offers an intriguing interpretation. Noting that the previous verses delineate the requirements of ritual and hygienic purity in Israelite military camps, he suggests that the slaves in question are fleeing across battle lines and seeking refuge with the Israelite army. The prohibition is therefore motivated by a concern that if returned to their masters slaves would share crucial intelligence based on their observations during their stay in the Israelite camp.

I am inclined to agree with Philo, the first century Jewish exegete and philosopher, that the Torah’s concern is neither jurisdictional nor spiritual nor strategic but rather moral and ethical (On the Virtues, 124). The escaped slaves standing before us have risked life and limb to flee their homeland and find protection in ours. Only the sting of the master’s lash would have been reason enough to face the dangers and uncertainties of the journey. In granting these slaves asylum the Torah declares here, as it does elsewhere (see Exod. 21, 20–21; 26–27), that while slavery is countenanced, harsh and abusive treatment of slaves is not.

It must be noted that according to Leviticus only non-Israelites may be purchased as slaves (Lev. 25, 44–46). Israelites, on the other hand, may be subjected to servitude, but never to enslavement. They may not be treated as chattel to be owned in perpetuity, nor may they be forced to perform harsh labor. “For [the people of Israel] are My servants, whom I freed from the land of Egypt; they are not to be sold as slaves. You shall not rule over [a fellow Israelite] with crushing labor; you shall fear your God” (Lev. 25: 42–43).

This distinction is troubling; it condemns the institution of slavery but yet allows the enslavement of the “other.” And I can imagine a 19th-century Southern preacher declaiming the verses in Leviticus allowing the enslavement of those “from among the nations surrounding you” and assuring his congregation that the enslavement of black men, women, and children was fully in accord with—perhaps even an expression of—God’s will.

But Torah is not frozen in time. Beginning with Exodus, the biblical saga encompasses Israel’s journey from enslavement and degradation to dignity, autonomy, and a life of justice and compassion through service to God. But this saga is, and is only meant to be, the beginning of an ongoing quest. The Five Books of Moses are the Word but not the last word. For May, reading Deuteronomy in 1861, Deuteronomy’s prohibition was a declaration that no human being could ever claim full dominion over another; the ultimate fulfillment of that ideal, he believed, could come only by abolishing slavery altogether.

One might conclude that with the abolishment of slavery—if by slavery one means legal ownership of one human being by another in perpetuity—the ideal embodied in this verse, at least as May read it, has been realized. But it’s a funny thing about biblical verses—they come back to haunt us.

Refugees are at our southern border, many of whom are seeking political asylum and/or protection from physical harm. I am neither a prophet nor the son of a prophet, so I will not claim to know God’s will in this matter. But as a people who feel obliged to hear the voice of Torah, whether as commandment, guidance, or inspiration, these verses demand our attention in this pivotal moment. There may be among those seeking entry opportunists and even criminals. But let’s be honest. Large numbers of our fellow human beings have traveled as many as two thousand miles risking danger, injury, and death. What kind of person makes such a trip? Only the desperate, fleeing an evil fate far more certain than the calamities that the journey may bring. These are the runaway slaves of 2019, arriving penniless and powerless, seeking compassion and protection like the refugees of old. If we do not recognize their humanity, if we ignore their pleas, have we not shut our ears to the Torah’s voice as well?