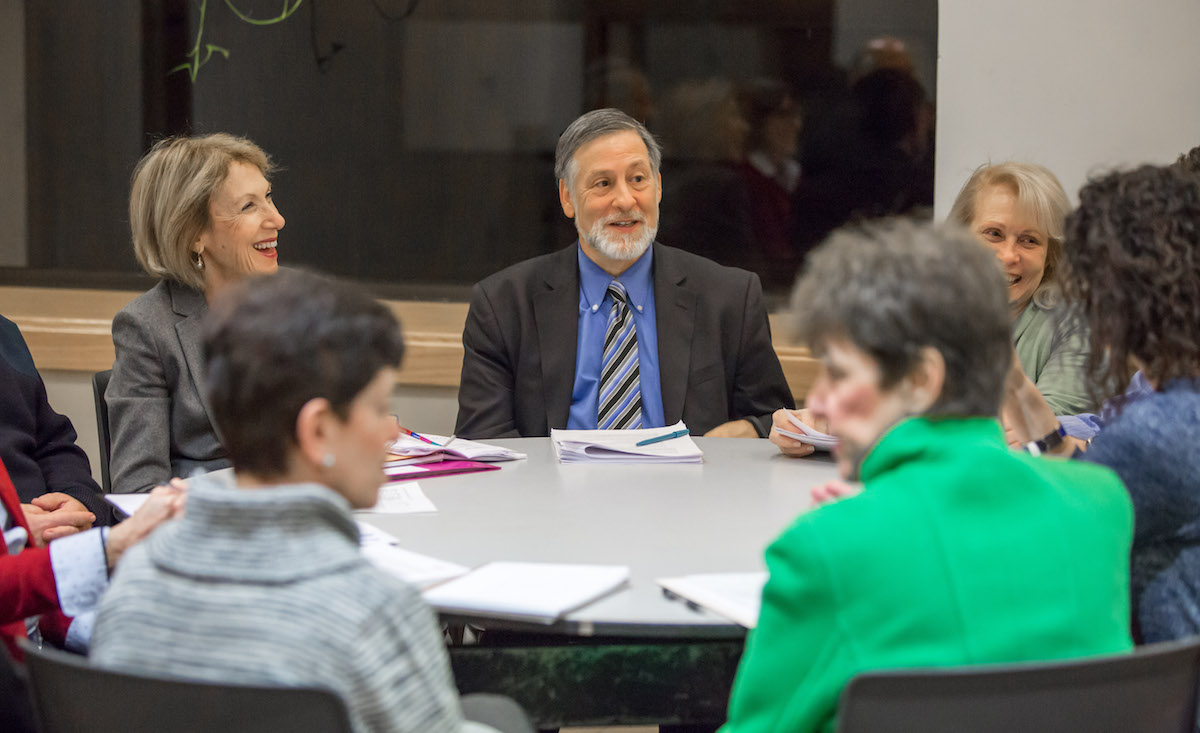 JTS’s Context program is a two-year intellectual journey that fosters a sense of being at home in Jewish culture, religion, text, and civilization. Participants meet weekly, studying with major scholars and forming a close, supportive learning community.

Share the journey with other adult learners from diverse backgrounds who are committed to serious Jewish study. Context classes evolve as vibrant learning communities that support and sustain each participant’s dedication to understanding the Jewish past and exploring its meaning for our lives today.

Context is taught by JTS faculty and other distinguished scholars associated with JTS who are committed to sharing their love of Jewish learning beyond the academy.

What past Context students have to say:

Tuition for Context is $900 per year. A $250 deposit is due upon registration.

Payment plans are available. One student in each Context cohort supports the JTS staff as an administrative and technology liaison and receives a 50 percent tuition discount in appreciation for these services.

The Hebrew Bible, or Tanakh, is the central text of ancient Israel and the foundational text for Judaism. This semester balances an overview of the Bible with focused discussion of core texts, such as the Creation narrative, the Exodus, the Revelation at Sinai, and the prophetic books. You will examine various biblical genres, structures, and concepts, as well as the historical and religious experience of ancient Israel. Biblical texts will be analyzed through different lenses: literary, historical-comparative, and rabbinic commentary. This in-depth exposure to both familiar and less familiar texts and to different modes of reading will challenge you—and may lead you to reconsider some long-held views.

The rabbinic period—from the Second Temple to the completion of the Babylonian Talmud—saw the emergence of new Jewish leaders whose approach continues to define our Jewish lives today. The Rabbis developed a new vision of Judaism grounded in learning, and a legal system that has shaped the contours of Jewish community, culture, and behavior for the past two millennia. This semester you will explore the Jewish encounter with empires of the ancient world and become familiar with the key collections of rabbinic texts and how to read them. Secondary readings will convey how the Rabbis grappled with urgent theological, ethical, and communal issues. When examined in conjunction with biblical texts, these sources will reveal how central beliefs and practices evolved radically over time.

Jewish life during the Middle Ages (roughly the 7th century through the 17th century) built upon earlier rabbinic foundations to generate the construction of a Jewish civilization with distinctive approaches to communal life, social norms, beliefs, values, and religious practice. During this semester, you will encounter core texts that highlight key dynamics of the Middle Ages, including Jewish political and  cultural relations with Muslim and Christian host societies; the creation of new modes of community in the Diaspora; and the vast expansion of Jewish culture in the realms of philosophy, mysticism, liturgy, and textual commentary.

Beginning with the 18th century Age of Enlightenment, modernity posed a significant challenge to Jewish culture, community, and identity. It generated new social and economic opportunities, but also threatened traditional Jewish values and society. As in previous eras, modern Jews engaged with sacred texts—suggesting that, however great the rupture and discontinuity, their passion for reading and interpretation continued to be a source for Jewish creativity and thought. During this semester, you will delve into core philosophical, political, and literary texts that reflect an ongoing engagement with the Jewish past, as well as profound interaction with and involvement in the broader surrounding culture.

We'll let you know about classes, lectures, and other opportunities online, on campus, or in the New York area.
x