When God Said “No” to Moses

It must have been a great comfort to Moses—and not only a disappointment—that God turned down his request to see God’s glory. The wind was presence enough, on top of the mountain, much of the time—the wind, and the voice in the wind. Every visit of divine speech exhausted him now. Even the words that did not demand that he do battle, climb higher, challenge Pharaoh, rebuke the Israelites yet again, or simply—on some days the hardest—endure.

He had long expected that his people would not satisfy their God. They needed to see what no one could see. They could barely hear what he listened to daily, quiet or pounding, in his head. The shofar blasted loud, and they shrank back at the sound. God thundered from the top of the mountain—and they retreated, sensibly, for cover. It could not be any other way. Only he heard the words through the noise. They saw the sounds, he knew they did. They strained hard to get more, but only he came away with the sense of it.

And now, with only his life to lose, just himself and God alone up there—the two of them alone again—he had asked to see more. To know the end. To hear past the thunder.

His request for the people had already been granted. God’s face would go with Israel. The countenance would accompany them. He could have rest from worry over the people’s fate in the absence of the countenance.

But from his own hardest travail he had not been promised rest. The work was not the hard part. What he needed was respite from the mystery. From not knowing God’s ways, God’s intentions, where God was facing, where time was taking them. He of all men alive had the best chance to know this. God had not actually said that he couldn’t, at least not yet. Maybe there was a chance to find out.

So he had burst out with it directly. No more circling round the point of what he most desired. He had asked for what God had never granted anyone. “Oh please let me behold your glory!”

There. He had voiced it. Not a plea to have the ways of God made known to him, as before, but a prayer to have the glory of God shown to him. The request took his very breath away. God’s assent might well mean that he would never breathe again. But what was breath for, God’s breath, loaned him for a time, if not to fill it with this longing? With all his being he wanted to touch the glory of God’s presence. To hear, from inside and out, the light of the divine countenance. The longing he bore for God at the peak of the mountaintop on which God had descended was well-nigh unbearable. He craved an end to it.

And God answered him depth to depth. “No.” What Moses wanted he could not have. “You cannot see My face, for man may not see Me and live.” No. Relief and disappointment joined. The answer itself would have to be enough. He would have to go on, as human beings do, without knowing how things were. This interview was at an end.

And then Moses suddenly heard the rest of what God had said. God had not turned down his request, but rather answered it in a way that he—that any human being—could never have imagined.

“I will make all My goodness pass before you, and I will proclaim before you the name yod-hey-vav-hey, and the grace that I grant and the compassion that I show.”

Moses would not see God’s face while the voice sounded, and all God’s goodness passed. He could not watch the scene from a distance, take it in, grasp hold of it. He could not see the glory. No human being could be the subject of such a sentence, command that verb, have God as an object. Not the Israelites down below, with their calf, nor he up here with all of his entreaties. The kind of knowing he wanted would never be his.

But God, he now realized, had promised more than he had asked, not less. As God’s goodness passed before his face, he would hear the speech of God filled by the will of God with the sound of God’s own name. And as if that were not enough—more than enough—this would happen as he clung to a rock, a place prepared by God—clung to it with God, held in place by God. God’s hand, pressed against him, would shield Moses from what he could not see and live, as he was grasped whole by God’s glory. God would not stand revealed before him. But God would hold him tight, shelter him, touch him from head to toe.

The glory would pass on, and Moses would see again, whether his eyes were open or closed. He would see inside and out. He could look then all he wanted—when he would no longer need to look. The face of his seeing would be proof enough of God’s presence. The tingling of his flesh would bear witness from that day forward. Every pore of his skin would remember the divine palm that had held him.

The wind rushed by Moses as the blood rushed to his head. Events hurtled faster but still not fast enough. His head ached with the anticipation. It would ache far more, he knew, when the weight of all that light pressed in on him from God’s side as the cool of God’s mountain squeezed him from the other. All this God had promised. It would soon come to pass. God’s love was overwhelming. He was, for a moment, content.

The artwork and commentary, adapted from the 2005 installation Seeing Sinai: Meditations on Exodus 33–34, were part of the landmark art exhibition Reading the Visual / Visualizing the Text,which was on view at The Jewish Theological Seminary in the spring of 2013. Seeing Sinai was a collaboration between artist and thinker, the fruit of a yearlong process of reading, talking, and painting. 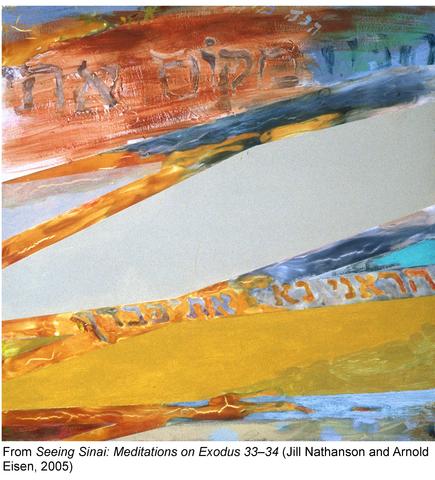