Two Nations Struggling in the Womb

This is the first in a series of commentaries linking Parashat Hashavua, the weekly Torah portion, with “parashat hashavua”—an idiomatic way of referring to an event or story that dominates the week’s news in Modern Hebrew.

The map of the United States is divided almost equally between red and blue as I write this column on the morning after the 2018 midterm elections. The Republicans have increased their majority in the Senate, and lost their majority in the House. Many races were too close to call far into the evening, and were decided in the end by the narrowest of margins—even as the two major parties and their supporters apparently stand farther apart from one another than at any time in recent memory. The results confirm the widespread view that Americans have rarely been less united. “The partisan divide on political values grows even wider,” declares a recent Pew Research Center report. On a whole host of matters, “the divisions have never been this large.” David Brooks put it this way: “grand canyons now separate different sectors of American society and these canyons are harder and harder to cross.” The midterm election is now behind us—but there is every indication that the disputes cleaving Americans in two will only intensify in the months to come.

“This is the story of Isaac, son of Abraham,” the Torah announces at the start of Parashat Toledot (Gen. 25:19): “two nations” struggle in Rebecca’s womb to such a degree that she cries out, “Why do I exist?” The twins will struggle ever more bitterly as the years go by. Esau, returning home famished from the hunt one day, begs Jacob the homebody for “some of that red-red stuff” cooking on the fire, and carelessly gives away his birthright as the elder son in exchange. Later, with the connivance of their mother Rebecca, Jacob dresses up as Esau and lies about his identity in order to receive the blessing of their nearly-blind father, Isaac. “Have you not reserved a blessing for me?” Esau cries. “Have you but one blessing, Father! Bless me too, Father!” (28:34, 38). We understand full well why Esau “harbors a grudge against Jacob,” and vows to kill him one day. Rebecca prudently advises Jacob to flee. He survives by putting a great distance between himself and his brother, one that the years will prove “harder and harder to cross.” 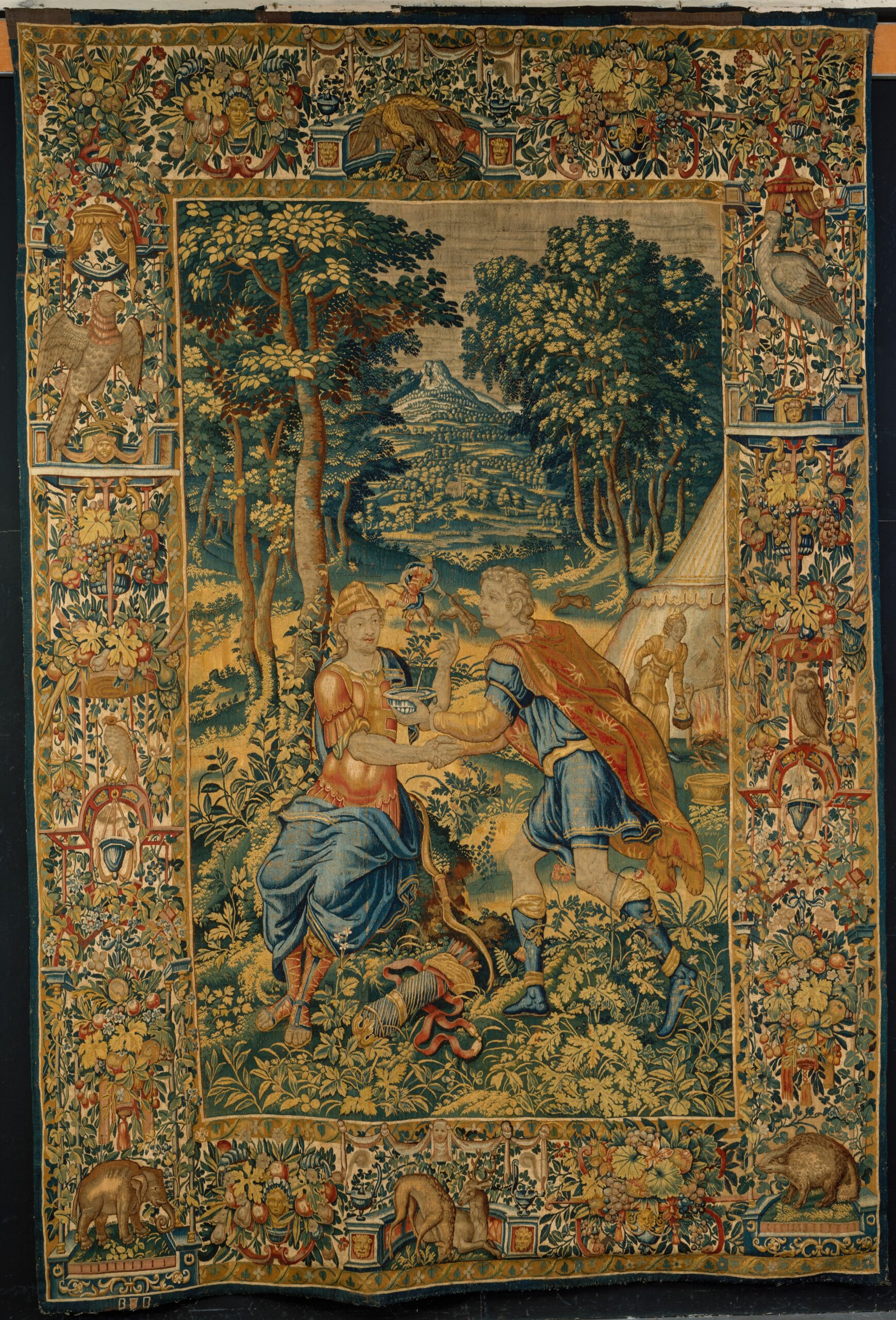 I have not been able to find a tradition among the commentators that identifies Jacob with the color blue to match the clear association of Esau (progenitor of Edom) with red (adom), unless one counts the color of the fringes on the garments worn by male Children of Israel, Jacob’s descendants. One medieval tapestry, shown at the right, does depict Esau largely in red, but places a blue cloak on his knees and shoulders, while Jacob, who appears largely in blue, wears a red cape. The brothers share elements of yellow. This is, I think, a perceptive reading of the Biblical account; it recognizes the twins to be more like each other than either one of them (or most commentators) might allow.

The Torah encourages such nuance. Its narrative is of course written by Jacob’s side of the family, and that is true for the commentaries added over the centuries as well. Jacob—the “simple brother who dwells in tents”—is generally regarded as the good sibling, and Esau—skilled at hunting—as the opposite (25:27). When the two meet up again after many years, Jacob fears that Esau will finally take revenge for the lost birthright and blessing, and plies his brother with gifts that Esau declines. Jacob prudently declines Esau’s offer to accompany him on the next stage of his journey home. The text artfully lends itself to divergent readings of motivation, emotion, and intent at every point. Jacob and his progeny dominate the storyline of the Torah ever after, but he is repeatedly portrayed in a less than favorable light. Nor is Esau written out of the text entirely; he is accorded an extensive genealogy (36:9–42). Both brothers carry forward aspects of their parents’ characters. Neither is without significant flaws. The Torah takes pains to ensure that we do not fail to notice that complexity.

While many commentators regard the struggle in Rebecca’s womb as a foreshadowing of eternal enmity, others take a different view. Rav Yehudah reads Genesis 25:23 not as “two nations (goyim) are in your womb” but as “two proud ones (ge’im),” referring to the Roman emperor Antoninus and the great sage Rabbi Judah the Prince (BT Avodah Zarah 11a). The former is a descendant of Esau (Edom is identified by the rabbis with Rome), while the latter of course descends from Jacob, whose name God changes to Israel (32:29). Despite that, rabbinic legend depicts Antoninus and Rabbi Judah as debating partners and even friends. Explicating the prophecy (Gen. 25:24) that “one people shall be mightier than the other,” the 18th-century commentator Or Hahayim notes that enmity between the nations descended from Jacob and Esau will never subside because the strength of one will depend upon the weakness of the other; their relationship, in other words, will always be a zero-sum game. Still more poignantly, to my mind—and far truer to American politics in 2018—the Zohar declares (Shemot 12b) that “the Messiah will not come until the tears of Esau will be exhausted.” A nation cannot long survive deep cleavages. The kabbalistic sefirah that corresponds to Jacob is not associated with red or blue but with purple—a mixture of the two.

Perhaps the most depressing fact related in that recent Pew Report on the American electorate is that “the shares of Republicans and Democrats who express very unfavorable opinions of the opposite party have increased dramatically since the 1990s, but have changed little in recent years.” A quarter-century ago, less than 20 percent in either party viewed the other unfavorably. It is not new that urban voters prefer Democrats and rural voters Republicans, with the suburban voters who reside in areas between the two tipping the scales in one direction or the other. What is new is the level of animosity and disrespect for the other side, from members of both parties. When it comes to reading the facts about Donald Trump the two parts of the electorate seem farther apart than ever.

I keep thinking, on this morning after, of the moment in Genesis when Esau runs to greet Jacob. The Torah tells us that “he embraced him and, falling on his neck, he kissed him, and they wept” (33:4). Dots appear in the scroll over the word “vayishakehu” (“and he kissed him”). Some commentators take the verse at face value, apparently believing that there must and will be reconciliation at some point: that despite past enmity, “at that moment he kissed him with all his heart” (Rashi, citing Sifrei). Others, convinced that Esau was not capable of kindness, read the word differently, that it was a half-hearted kiss (ibid.) or even that Esau was trying to bite Jacob (Radak). Jews fought Rome bitterly for centuries. One hopes that Americans, receiving the blessings they need from God and one another, will someday soon find a way to reconcile.