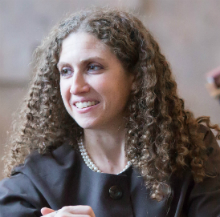 Making a vow and living by it might be the ultimate act of a free person. It is a choice to refrain from eating something, looking a particular way, or benefiting from certain relationships. It is a choice to value something over your own enjoyment. You can only make a vow if you are free.

In Parashat Mattot Chapter 30, we learn that if a woman makes a vow, her father or husband can invalidate it on the day on which he hears about it. If he does not invalidate it that day, he is culpable if she breaks it. The only women who can make their own vows and not have them invalidated by a man are divorcées and widows.

At other moments in my life, I would have glossed over this section, determined to focus on something more inspiring, and less offensive. Now, I am leaning into it.

What changed? This year the Hendel Center embarked upon a Gender, Torah, and Tradition Fellowship. We engaged 22 people including students, faculty, alumni, and a board member and spent a year exploring how we make meaning of patriarchal texts in an egalitarian movement.  The Conservative Movement has embraced egalitarianism. We also have not discarded traditional texts that center the male experience and consider women as a category that must be understood in in relation to men. Our group included people who are queer and people who are straight. It included people who identify with the gender they were assigned at birth and people who do not.  It included people who see the world through a gender lens, and people who have the luxury of never having to consider if the Torah and the rabbis thought they were people or chattel.

Our goal was to see how we might be transformed by participating in a group discussion of texts that made clear that women do not have control of their own bodies and circumstances. Would we feel differently about these texts by studying them together? Would we understand Jewish tradition differently? Might we teach differently?

One of the participants, Laynie Soloman, the Associate Rosh Yeshiva at SVARA: A Traditionally Radical Yeshiva, asked the group early on to pay attention to what happens in our bodies when we encounter a text that challenges us because of who we are. They taught Pirkei Avot 1:5 about giving tzedakah to people who are hungry. As an aside, that text directs you not to speak with women for it leads you down a bad path.

I would ordinarily use this text to teach about generosity and giving tzedakah as a requirement of living a religious life. But since it is linked to a text that considers women dangerous, I must make a choice. Do I edit out the line about women? Include it and risk losing the group because they will decide Judaism must be backwards? Find an entirely different text to make the point and relegate this one to the trash heap? None of these choices feel particularly good. Contemporary Jewish educators make them all the time.

Our group members shared how we experience difficult texts in our bodies. We also shared what we need to keep going: a hevruta with whom we can acknowledge the hurt; a teacher who would acknowledge the pain and even share some of their own challenges with the text. And finally, someone added, the faith that if I keep on going the rewards will be great; the text will be rich. Our tradition is bigger than any single passage.

This was not revelatory to me. What was revelatory was how much less lonely it felt to encounter the text after having learned with this group for a year.

This time when I read that almost all women cannot make a vow that can stand on its own, I noticed that I felt angry. But I did not skip it. It tugged at my heart. It also coincided with the overturning of Roe v. Wade. So, I was doubly mad to read about a woman making a vow and having a man nullify it.

I discussed it with Dr. Marjorie Lehman, who leads the JTS Rabbinic Literature and Cultures Department, who encouraged me to explore how the rabbis of the Talmud understood vows. There I found two patterns. It turns out they were uncomfortable with the very idea of a vow. The rabbis believed the punishment was severe for broken vows, thus they concerned themselves with trying to reduce anyone’s risk of making a vow they couldn’t keep. They certainly were not going try to increase the opportunities for women’s vows to stand. The other interesting trend I noticed was that the rabbis were focused on how a woman’s vow might impact sexual relations with her husband. In tractate Nedarim they explore the ways in which a woman’s vows could negatively impact her sexual relationship with her husband. The rabbis’ fear of broken vows mitigated my anger some since I could imagine the rabbis doing their part to minimize anyone’s risk. The teaching from Nedarim that aimed to protect the men from sexual disappointment or the risk of not having children to inherit their names sat less well with me. It felt like an instance of women being treated as chattel.

Parashat Mattot afforded me an opportunity to experiment with our hypothesis that it is more productive to lean into a difficult text than to avoid it. I sat with it, expressed some anger, and the text did not fall apart. Neither did I. Then I reached out. I read feminist commentator, Judith Romney Wegner, who wrote Chattel or Person? The Status of Women in the Mishnah. I was in good company struggling to understand how the rabbis conceived of women and why.

What started as anger at a text that prevented me from independently making a vow led me to think more deeply about the nature of vows. Vows are complicated to the rabbis, even dangerous. By the Middle Ages we developed a tradition of reciting Kol Nidrei on Erev Yom Kippur. We annul the vows we will make between individuals and God in the coming year, for fear that if we inadvertently break them we will suffer severe punishment and death.

I now have a group of 22 people with whom I have history of studying hard texts, sharing the visceral feeling those texts create, and continuing with the belief that something good is just around the next page. This year I will bring this learning along with me to Kol Nidrei. I will be grateful for the vows I do make this year and the care the rabbis put into protecting all people from being bound to vows we could not keep.

And the next time I encounter a text that challenges my essence, I will plunge right in and bring my hevrutas with me.