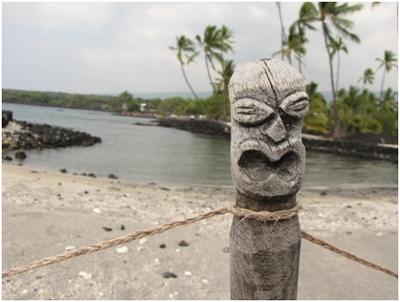 Pu`uhonua O Hōnaunau, the City of Refuge, on Hawaii’s Big Island was functional into the early 19th century, when kapu, Hawaii’s system of ritual taboos, was overturned by King Kamehameha II. Until that time, many breaches of the kapu could result in death, including for an offence as ephemeral as allowing your shadow to fall over a chief’s house. However, by entering a pu`uhonua (a place of refuge), often by swimming across a bay, and performing a ritual facilitated by the priest there, the punishment could be annulled.

Though the cities of refuge described in our parashah (Num. 35: 6-34) have significant differences from the pu`uhonua—such as the requirement to remain there until the death of the High Priest, and the application of the law only to the manslayer—a common motivation can be discerned. Through the performance of a crime, the essence of the system (whether the sanctity of human life in the Torah, or the hierarchical ritual order of old Hawaiian religion) has been disturbed and must be repaired. However, the death of the culprit is not desirable either. To mediate between these opposing needs, locations of special sanctity were established, both in the Land of Israel and on the shores of the Pacific islands.