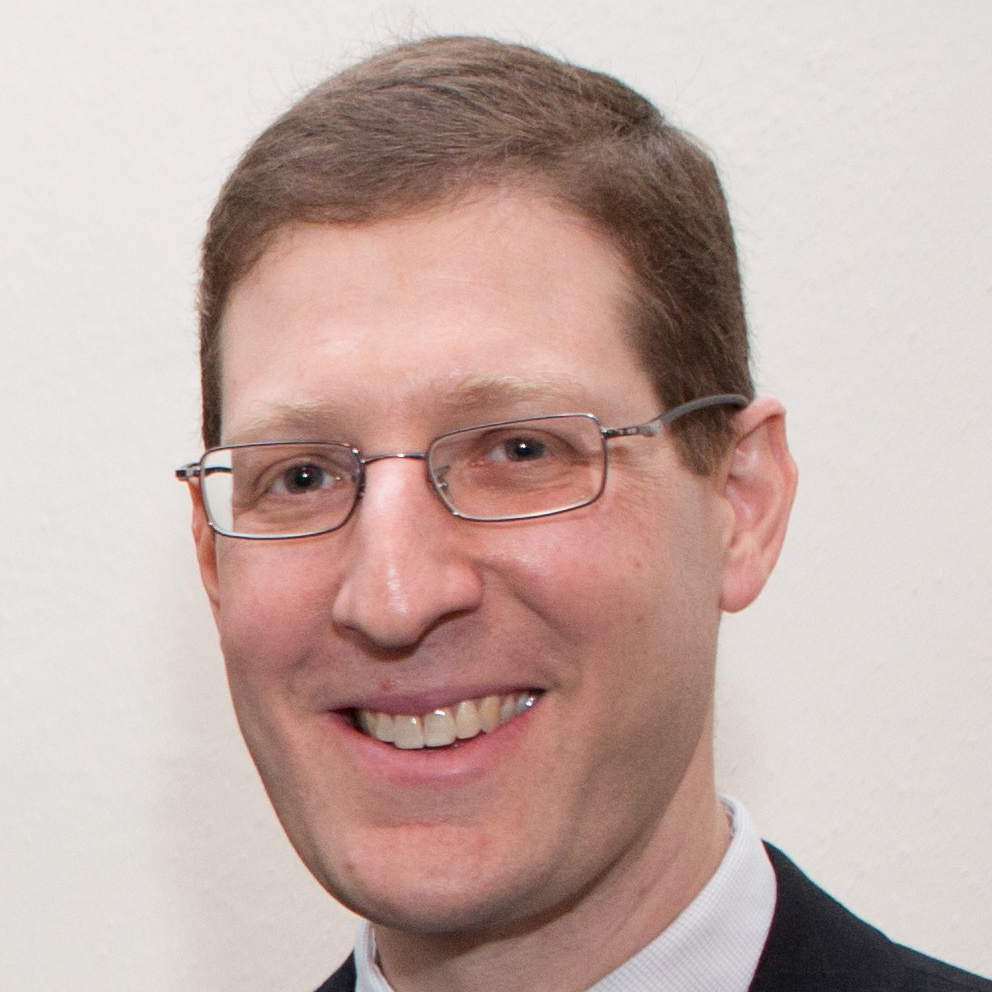 Every Passover as we read the Haggadah, we recite:

In each and every generation, a person is obligated to regard himself as though he actually left Egypt. As it says: “You shall tell your son on that day, ‘It is because of this that God took me out of Egypt.’” (Exodus 13:8)

Seventy years ago, in April 1946, the first Passover in postwar Germany followed the liberation of the concentration camps. The survivors who gathered to form the She’erit Hapletah, the surviving remnant, felt this transition from slavery in a more immediate sense than any generation of the children of Israel in the 2,000 years that preceded them.

At Pleikhershof, a group of Zionist youth gathered on the agricultural training farm (hakhshara) they had established and named Kibbutz Nili, preparing for life in Palestine. They invited representatives from the United Nations Relief and Rehabilitation Administration, the American Jewish Joint Distribution Committee, and the Central Committee of the Liberated Jews in the U.S. Zone of Germany; members of the Jewish Agency for Palestine delegation; and local camp committees to join them for their Passover seder. This was not just any farm—it was the estate of Nazi anti-Semite Julius Streicher, who was awaiting trial in nearby Nuremberg. Streicher had been publisher of the foremost Nazi propaganda paper, Der Stürmer, whose masthead read “Die Juden sind unser Ungluck!” (The Jews are our misfortune). 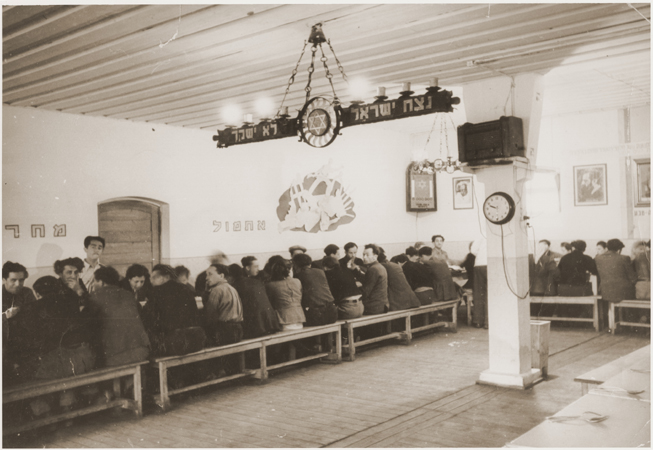 Members of the Kibbutz Nili hakhshara in the dining hall where the seder took place in Pleikersdorf, Germany. Visible decorations include the motto of the kibbutz, the Hebrew words for “yesterday” and “tomorrow,” and a portrait of Theodor Herzl. Reproduced by kind permission of the United States Holocaust Memorial Museum.
See larger image.

Photos poignantly captured that first seder, as the participants sat beneath portraits of Zionists Theodor Herzl and Chaim Weizmann and two words on the wall: Mi-she’abud le-ge’ulah (From slavery to redemption). Coverage in the displaced-persons press of another seder taking place on the Hochland  farm noted:

Never have the words from the Haggadah “Shebekhol dor vador omdim alenu lekhalotenu” (That in every generation they stand before us to eradicate us) had so much meaning. Even stronger, however, was the meaning of the words “Hashata hakha, leshanah habah be’ara de-yisra’el” (This year, we are still here; next year in the Land of Israel). (Mojse, “Pejsach in Hochland,” BaMidbar: Wochncajtung fun di bafrajte Jidn, May 7, 1946, #6 (8), p. 7, in YIVO Archive’s Jewish DP Periodicals Collection, reel 15-11)

U.S. Army Chaplain Rabbi Abraham Klausner officiated at the first official Passover seder in Munich, having facilitated the publication of A Supplement to the Passover Haggadah, written by Yosef Dov Sheinson, printed by the military press, and bearing the insignia of the Third Army (Klausner, Letter to My Children, 108). In his preface to this Haggadah, Klausner noted, for the American soldiers and relief workers who would attend the seder, the symbolism of Egypt/Germany, coming to

the city of Munich, there to relate as of old, the miracle of freedom

. . . in their hearts they felt very close to all that which was narrated. Pharaoh and Egypt gave way to Hitler and Germany. Pitham and Ramsees faded beneath fresh memories of Buchenwald and Dachau. (A Survivors’ Haggadah, 8)

Klausner noted the presence of the survivors, who bore witness to the oppression of the modern-day Pharaoh:

Just beyond the sounds of the Seder, in the wreckage of the city, the former slave sat in company with his tantalizing memories and celebrated his first Passover since liberation. He fumbled his life-giving gift, trying as best he could to understand this miracle of freedom. It was not all that he had dreamed of . . .

Now, more than ever, they understood what God had meant when He said to Moses, “They are my slaves and they dare not be enslaved to slaves.” These words now sounded a warning to the world at large for in the slavery of a single human being the world would find itself enslaved. (Ibid., 10) 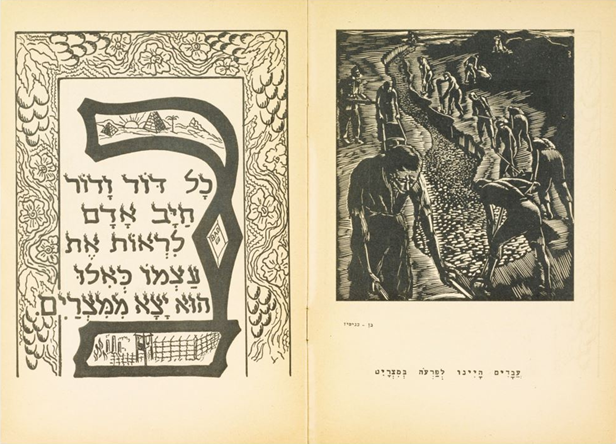 From A Supplement to the Passover Haggadah

As Klausner marked the first Passover since liberation, he noted the continuing distinction between liberation, achieved nearly a year earlier, and freedom, which continued to be denied the Jewish survivors. Likewise, Dr. Samuel Gringauz, a survivor from Lithuania who became one of the early leaders of the surviving Jewish population, noted that “yetsias Nazism,” the exodus from Nazism, was quite different from the exodus from Egypt. The survivors may have been liberated, but until they could realize their national future and live in their own Land, they would not be free.

The Survivors’ Haggadah also noted the irony of continued Jewish oppression and enslavement at the date of the “festival of freedom”—perhaps nowhere more poignantly than in its updated version of “Dayenu,” which—after chronicling the long history of Jewish persecution—noted specifically:

All the more so, since all these have befallen us, we must make Aliyah, even if illegally, wipe out the Galut [Exile], build the chosen land, and make a home for ourselves and our children for eternity. (Ibid., 62–63)

For much of the surviving remnant in postwar Germany, Zionism—as the last will and testament of a murdered European Jewry bequeathed by the dead to the living—was a solemn collective obligation. As we mark Pesach in the year 5776, 70 years after Pesach 5706, and we note, almost daily, the passing of the generation of survivors who did not have to imagine, but knew all too well the transition from slavery to freedom, let us recall the poignancy with which they reflected on the importance of “Leshanah haba’ah beYerushalayim” (Next year in Jerusalem)—this year we are slaves, next year let us be free in our Land. The journey through the wilderness may be long, but let us not take for granted what that State, and that freedom, mean to those who experienced slavery firsthand. Let us pray that next year, Jerusalem will enjoy peace and security and freedom—and, just like those youth gathered on Kibbutz Nili, let us recall the meaning of the acronym from the Book of Samuel (I Sam. 15:29): Netzah Yisrael lo yishaker—The eternal strength of Israel does not lie.