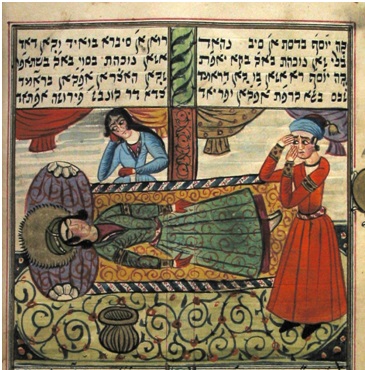 Joseph and Zulaykha was written by Jāmī, a Persian poet and adherent of the mystical tradition of Islam (Sufism). It is based on the biblical story of Joseph and the wife of the Egyptian courtier, Potiphar (she is known as Zulaykha in Muslim tradition). In parashat Vayeshev, she attempted to seduce Joseph but was spurned. In contrast, in Sufism, the eventual love between Joseph and Zulaykha was a model of the love between God and his mystical devotees.

This manuscript was produced after the Jewish community of Mashad had been forcibly converted to Islam in 1839. However, the ongoing popularity of this story among Jews shows that their affection for this Sufi tale was not a product of coercion but of their attraction to Sufi spirituality. The text is a Judeo-Persian transcription of the story, and this page describes the death of Joseph, as is also found in this week’s parashah. In this account, however, it is Zulaykha who mourns him.