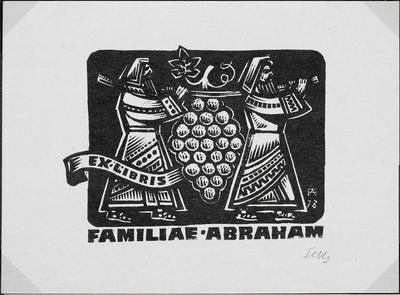 It might be surprising, given its association with the people’s sin of being dissuaded from entering the Land, that the motif of the two spies carrying an enormous bunch of grapes (Num. 13:23) became a popular Zionist symbol and eventually even the logo of the Israeli Ministry of Tourism. Indeed, it has been suggested by arts writer Menachem Wecker that several of the older Christian representations of this image deliberately portray the two grape-bearers in a negative light. (A few of those images are featured in this blog post).

The Zionist appropriation of the symbol was associated with the Bezalel School of Arts and Crafts in Jerusalem, which emphasized the “calm and pastoral” biblical Land of Israel “as an alternative to the images of misery and exile in [early 20th-century] Jewish life in the Diaspora.”1 In line with this positive spin that connects this image not to the negative reports of the Land, but to its bounty and utopian qualities, this mid-20th-century bookplate from The JTS Library’s collection shows the spies not as fearful or lacking in faith, but as strong, calm, and dignified.