The Construction of the Tabernacle From the Hebrew Republic (1700) 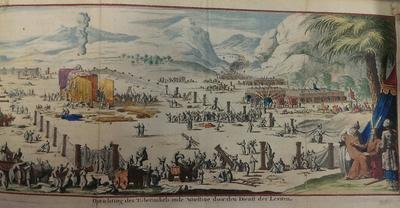 The building of the Tabernacle in the desert for the Levites’ service.

The Hebrew Republic (De Republica Hebraeorum in the original Latin) was written in the aftermath of Dutch independence from Spain. Petrus Cunaeus principally drew from biblical and Talmudic sources and from Maimonides’s Mishneh Torah in order to reconstruct (or, in reality, construct) the development, structure, and challenges of an ancient Hebrew republic, with the intention of providing a model for the emerging Dutch republic that was both religious and practical.

This image of the construction of the Tabernacle is taken from the translation into Dutch that was published in Amsterdam in 1700. It illustrates the earliest responsibility of the Levites, who were to take on a number of important functions in the political arrangement that Cunaeus describes.