By :  The Library of the Jewish Theological Seminary Posted On Oct 23, 2014 / 5775 | Author Conversations: Between the Lines
Download

The JTS Library holds the largest Judeo-Persian manuscript collection in the West, and the third largest in the world. This repository is crucial in understanding the intellectual legacy of the ancient Iranian Jewish community, whose extant works rest in only a few large but neglected collections. 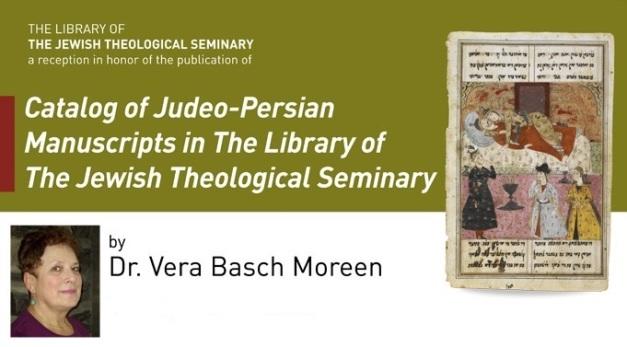 Dr. Vera Basch Moreen’s Catalog of Judeo-Persian Manuscripts in The Library of The Jewish Theological Seminary of America (Brill, 2015) serves as an essential reference work for scholars in the fields of Judaica and Iranica about the range of subjects—such as history, poetry, medicine, and philology—that engaged Iranian Jews between the 15th and 19th centuries, and the extent to which an understanding of classical Jewish texts was enmeshed in the literary and artistic sensibilities of the Iranian environment.

The exhibition Judeo-Persian Manuscripts in the JTS Library Collection, curated by Dr. Moreen, was on display in The JTS Library in the Fall of 2014.

Dr. Vera Basch Moreen is currently the foremost authority on Judeo-Persian studies in the United States. She has written four books, one of which (Miniature Paintings in Judaeo-Persian Manuscripts) was nominated for the National Jewish Book Award. Dr. Moreen has coedited four volumes on various aspects of Muslim, Jewish, and Christian relations, and has published numerous articles in peer-reviewed journals of both Islamic and Jewish studies. She is currently editing the section on Iran, Caucasus, and Central Asia in theEncyclopedia of the Jews in the Islamic World.

Dr. Moreen has taught at Swarthmore, Haverford, and Franklin & Marshall colleges and the University of Pennsylvania, and has held visiting fellowships at the Institute for Advanced Studies in Princeton, New Jersey; Oxford Centre for Hebrew and Judaic Studies at Oxford University; and Katz Center for Advanced Judaic Studies at the University of Pennsylvania. Dr. Moreen is the recipient of research grants from the National Endowment for the Humanities, American Council of Learned Societies, International Research & Exchanges Board, and American Philosophical Society. She received her PhD from Harvard University, and her BA from Princeton University.