Animal Sacrifice on an iPad: Finding Meaning in Va-yikra 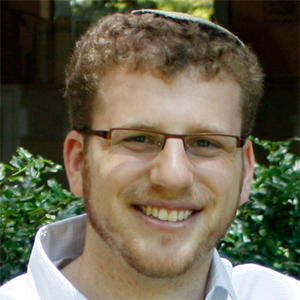 The calf flies up in the air as if catapulted by an unseen trampoline, followed in quick succession by a pair of doves, a cruse of oil, and a surprised-looking goat. With a deft swipe of a finger across the screen, each offering is “sacrificed” in front of an animated “Tent of Meeting,” complete with a cartoon splash of blood and decapitation. This rather irreverent digital adaptation of the sacrificial service can be played and enjoyed in Leviticus!, a new mobile game published by G-dcast. Lest details of this ancient form of Jewish worship be neglected, players are penalized for “sacrificing” non-kosher animals or animals unfit for sacrifice, and a bonus level allows players to sprinkle blood across the altar as described in the fourth chapter of Va-yikra.

In spite of its use of technology, high production value, and smooth gameplay, Leviticus! does not focus on finding meaning as one might expect in a 21st-century educational game. Ironically, this educational stance puts Leviticus! firmly in line with the classic pedagogic tradition of introducing children to the study of Torah through the arcane practices of the sacrificial cult described in Va-yikra. As Va-yikra Rabbah 7:3 states, “God said that since both sacrifices and children are in a state of purity let the pure occupy themselves with the pure.” That is to say, mere engagement with the surface level of the text, “the pure occupying themselves with the pure,” is the essential educational goal of one’s first encounter with Torah, without any focus on deeper meanings.

Unfortunately, the lack of depth and meaning in Leviticus! leaves the player with the sense that the sacrificial service of the Temple has little relevance for today’s Jews outside of a view of Jewish tradition laced with irony; irreverence without the requisite reverence. To that end, I would like to offer three of the many approaches to Va-yikra that might help infuse our reading of the book with meaning beyond flying goats and calves.

Sacrifice as the Ideal Form of Worship

The most traditional approach to sacrifice, the one most embedded in traditional text and prayer, views sacrifice as the ideal form of worship. From this perspective, were it not for the destruction of the holy Temple in Jerusalem in 70 CE, the Jewish People would be offering sacrifices much as described in Va-yikra and subsequent books of the Torah. It is this view that resonates in the traditional prayer found in the ‘Amidah to “restore the service to the inner sanctuary of your house,” and that God will accept “the fire-offerings of Israel and their prayers with love and favor.” It is also this understanding of Va-yikra that motivates controversial groups like the Temple Institute to research the Temple service with the goal of one day reestablishing sacrificial worship on the Temple mount.

This literalist view of sacrifice has often been deemphasized in the theology of the Conservative Movement. The prayer calling for the reestablishment of sacrifice found in the traditional ‘Amidah is slightly changed in Siddur Sim Shalom to “Restore worship to Your sanctuary. May your people’s prayers be accepted with love and favor,” thus eliminating direct reference to animal sacrifice while keeping language relating to the reestablishment of Temple worship. This liturgical shift hints at a second approach to Temple sacrifice.

Sacrifice as a “Divine Ruse”

In his book Israelis and the Jewish Tradition, the Jewish philosopher Rabbi David Hartman (z”l) explains Maimonides’ rationalist approach to sacrifice this way: “The prophecy of Moses arose in response to the seductions of idolatry. Because Israel was similar to all the nations it was vulnerable to pagan influences. The Bible legislated the qorbanot and many other laws in order to gradually wean the community from idolatry” (73).

For Maimonides, sacrifice is not an end unto itself, but rather a means to slowly move the Israelite People away from the idolatrous ways. The ultimate goal of sacrifice becomes that of developing a more pure form of worship focused around prayer and the contemplation of God’s nature. The laws of Va-yikra come to subdue the power of ritual sacrifice that had its origins in idolatry. Writing about these laws, Maimonides states in his The Guide for the Perplexed, “All this was intended to restrict this kind of worship [sacrifice], so that only the portion of it should subsist whose abolition is not required by God’s wisdom” (3:32).

From our modern perspective, this understanding of sacrifice creates a series of intriguing questions that help provide meaning to Va-yikra. Maimonides raises the question of which elements of sacrifice are rooted in idolatry and which are necessary to achieve true worship of God. Which parts of the service must be maintained, and which must be abandoned? In an introspective fashion, this perspective raises the question of whether or not we as a people have moved beyond the need or desire for animal sacrifice in our worship of God. If the answer to this question is that we have not, what might be keeping us mired in the world of idolatry?

Sacrifice as a System of Symbolic Ritual

The third approach to the sacrifice detailed in Va-yikra arises not in opposition to the first two approaches, but as a synthesis of both. In this approach, the complex ritual embedded in the sacrificial cult can be viewed as arising from a deep-seated human desire to be in the Divine Presence. With this understanding, the network of people, actions, objects, and sacrifices of the Temple service were developed out of a particular human or ritual need. While this desire to experience God’s Presence may no longer be satiated through the sacrificial cult, the need itself is still present in us and our communities. Each element of the sacrificial service then takes on the possibility of becoming a metaphor of it. In a description first brought to my attention by Chancellor Arnold M. Eisen, the anthropologist Mary Douglas views Va-yikra as “philosophizing by sacrifice.” Our job as we make our way through Va-yikra becomes to carefully study the nature of the sacrifice in order to uncover the philosophy behind it. This process has the potential to transform every aspect of the Temple service into potent metaphors and symbols for our modern world.

Examples of the complex symbolic power of Va-yikra have been expertly described by my colleagues in the numerous Torah commentaries now hosted on learn.jtsa.edu: From Rabbi David Hoffman’s description of the hattat offering as demanding that we take responsibility for our actions and the world in “Sin, Ritual Pollution, and Divine Alienation” to Rabbi Abigail Treu’s belief in “Finding Inspiration in Bullocks and Bloodstains” that Va-yikra serves as an example of a worldgrounded in ritual and community that we seek to re-create in our daily lives, the potential to find symbolic meaning in Va-yikra—to uncover the “philosophy” of our ancestors—is almost endless.

While lacking deep meaning, the game Leviticus! is not entirely without merit. After all, the Hebrew word for sacrifice is korban, whose root means “to come close,” suggesting that the role of sacrifice is an encounter between God and humanity. Leviticus!, with its engaging and humorous depiction of sacrificial worship, might serve as a first step toward that encounter, as long as we are willing to go deep and read Va-yikra with an eye toward finding God’s presence in the ancient text and in our modern world, animated flying goats and all. 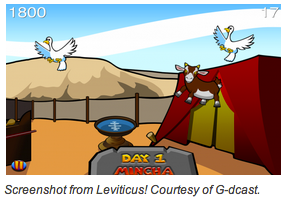