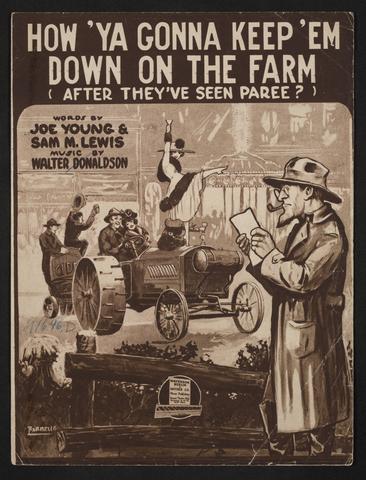 We are painfully aware that wars don’t end once the dust settles on the battlefield and documents of peace are signed, but rather that the “war at home” lives on long past military engagements, both in the homecoming of individual soldiers and the broad social changes that often follow. Ki Tetzei begins where the previous portion left off, discussing laws of war; however, in its second paragraph, it sharply turns to address issues of moral behavior in areas including family, agriculture, and sexual relations.

The sudden shift reminded me of this American song written shortly after World War I. A relic of American popular music, it reflects the anxiety held by some following the war’s conclusion about the exposure of “nice American boys” to the social and cultural mores of World War I–era France that were widely perceived as permissive, if not hedonistic, in comparison to the norms of American society at the time.

With this song in mind, the Torah portion’s transition from its initial words, “When you go to war against your enemy,” to issues that fall decidedly in the civil realm of society seems far less abrupt. They may reflect a level of prescience about the challenges to societal norms that can follow a soldier’s homecoming and a people’s collective experience of war. In different ways, the repercussions of war have been involved in the testing and transgression of political and social boundaries throughout history, including, in the past century, America in the Roaring Twenties, Israel after the Yom Kippur War, and much of the world after the Vietnam War.