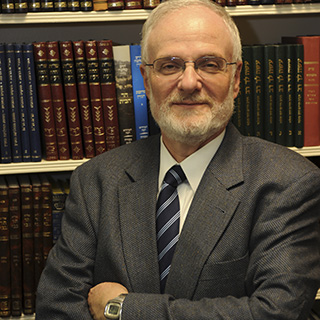 Joel Roth is Louis Finkelstein Professor Emeritus of Talmud and Jewish Law at JTS and Rosh Yeshiva Emeritus of the Conservative Yeshiva in Jerusalem.

Rabbi Roth previously held four administrative positions at JTS, serving as dean of students of the Albert A. List College of Jewish Studies (then called Seminary College), director of the Melton Research Center for Jewish Education, and associate dean and dean of The Rabbinical School.

An expert in halakhah, Dr. Roth was appointed to the Rabbinical Assembly’s Committee on Jewish Law and Standards in 1978 and served on it until December 2006, including a period of eight years as chairman. In addition to articles and responsa for the committee, Rabbi Roth has written The Halakhic Process: A Systemic Analysis and Sefer ha-Mordecai: Tractate Kiddushin.

Dr. Roth received a bachelor’s degree from Wayne State University in his hometown of Detroit. He also participated in the Herbert H. Lehman Institute of Talmudic Ethics, a special-studies program at JTS at that time. He received his master’s degree at JTS, where he was ordained in 1968. That same year, Rabbi Roth was appointed to the faculty of JTS, as he continued his studies toward a PhD in Talmud, which he received in 1973.

Dr. Roth’s research focus includes the halakhic process and the investigation of issues as they arise in Jewish law.