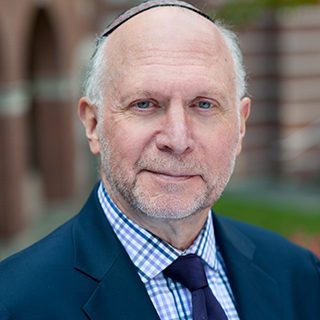 The Jewish Theological Seminary mourns the sudden and untimely death of Alan Mintz, Chana Kekst Professor of Jewish Literature, on May 20, 2017.  Alan was one of the preeminent scholars of Hebrew literature of our time. A profoundly insightful writer, he expanded our understanding and appreciation of the Hebrew language, modern Hebrew literature, and the Jewish life they illuminate. He was an exceptional teacher, an esteemed colleague, and a good friend.

Dr. Mintz’s current research centers on the late work of the Hebrew writer and Nobel laureate S. Y. Agnon (1887–1970). During the last years of his life, Agnon wrote hundreds of stories that focus on Buczacz, the Galician town in which he grew up and lived until he immigrated to Palestine. Dr. Mintz’s work will take the form of a collection of translated stories and a critical study of the fiction. This is an unprecedented project to reenvision, through the medium of fiction, the lives of Polish Jews during the early modern period.

Dr. Mintz’s previous project focused on Hebrew literature in America and the history of the Hebraist movement during the first half of the twentieth century. His study of 12 Hebrew poets who wrote in America between the two world wars of the 20th century is Sanctuary in the Wilderness: A Critical Introduction to American Hebrew Poetry (Stanford University Press, 2011).

His major academic works include George Eliot and the Novel of Vocation (Harvard University Press, 1977); Hurban: Responses to Catastrophe in Hebrew Literature (Columbia University Press, 1985), which explores how the Jewish literary imagination has dealt with successive calamities from the destruction of the Temples to the Holocaust; and Banished from Their Father’s Table: Loss of Faith and Hebrew Autobiography (Indiana University Press, 1988), which examines the inner world of intellectuals coming of age in Eastern Europe during a period of collapsing religious faith. Dr. Mintz is editor, with Anne Golumb Hoffman, of A Book That Was Lost: Thirty-Five Stories by S. Y. Agnon (Schocken Books, 1995). He is the editor of Hebrew in America: Perspectives and Prospects (Wayne State University Press, 1993) and The Boom in Contemporary Israeli Fiction (Brandeis University Press, 1997).

Dr. Mintz was the founder of Response magazine, which he edited from 1967 through 1970. In 1981, Dr. Mintz cofounded Prooftexts: A Journal of Jewish Literary History with JTS Professor of Jewish Literature David Roskies. After 25 years of publication, the editorship of the journal was passed on to Dr. Jeremy Dauber (Columbia University) and JTS’s Barbara Mann, professor of Hebrew Literature. The editorial offices of Prooftexts remain at JTS, which aids in the publication of the journal.