Israel in White and Gray 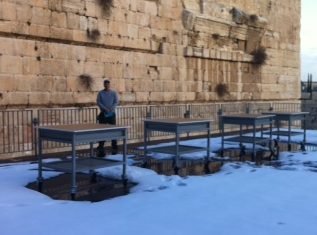 The snow in Israel—and me—at the Wall

The story that dominated news and conversation during my first week in Israel this past December was the snow. A foot and a half fell in Jerusalem in the course of a three-day weekend: the most in a generation (and some say: in a century). Three feet fell in Safed. A friend in Tel Aviv got in the car with his daughter to drive up to Jerusalem and experience the novelty—and got stuck on the way, spending the night in the car before being rescued by police. The highway became clogged with abandoned cars. By the time I arrived on Tuesday, the snow had long since stopped falling, but had barely begun to melt. Streets and highways were a mess. I regretted that I had not brought boots. Everyone was talking about snow: poetically, philosophically, religiously, and always with a sense of excitement. The entire country seemed to bask in the sheer pleasure of changing the subject from the usual talk about “the situation” and “the peace process.”

The effort was not entirely successful. On the plane from New York City I read a front-page column in Yediot by Nahum Barnea—one of Israel’s finest journalists—called “Until the Snow Melts.” It began with a paean to the beauty of the landscape: “A golden sun shone yesterday on a snow-filled West Bank . . . you’d have to be crazy to think of giving up one inch of this gorgeous land, I reflected. It is forbidden to withdraw from even one meter—as long as the snow has not melted.” Barnea was being ironic, but his point was utterly serious; the very next sentence described with wonderment what had happened on the Shabbat of the storm, when Palestinian drivers were stuck in the snow alongside Israelis. “Sometimes the Palestinians helped to push, sometimes the Israelis helped . . . This was one of the only weekends in recent years when there was not a single disturbance on the West Bank, no incident whatever. No Palestinian stone-throwing, no Jewish ‘price tag.’ Another 364 days of snow, and we will have arrived at the messianic era.” [The translation is my own.]

Snow is normal for most parts of the United States. Cooperation among people of different nationalities and religions is common in New York City. Here in Israel, a different notion of normality operates on both counts. For a short while, a storm had left the country and all its problems, all its differences, covered in white. It really was marvelous to behold, even after the fact. My driver excitedly pointed out piles of snow and felled trees as we made our way slowly, ever so slowly, from the airport up to Jerusalem. My visit along with The Jewish Theological Seminary’s Executive Vice Chancellor Marc Gary to the office of MK Ruth Calderon,who spoke at JTS last year and who will receive an honorary degree at JTS this May, was rendered even more celebratory by the visage of snow a half-foot deep on the lawn outside her window at the Knesset. The beautiful Friday night services at the new Masorti congregation in Jerusalem, Kehillat Zion, were deprived of numerous congregants reluctant to take their kids out on dark, icy streets still strewn with branches, and piles of snow. And the TV talkshow Politika, of course, took up the question of who was to blame for the lack of efficient snow removal and failure to care for homebound people left for days without food and electricity. Would there be a price to pay in future national or municipal elections? Who would pay that price?

The soldier killed on the border with Gaza barely made the newspapers in the immediate aftermath of the snowstorm, though the incident became more significant as the deaths and near-deaths multiplied in the days that followed: a stabbing that seemed politically motivated; a suspicious parcel found on a bus in South Tel Aviv, with disaster narrowly averted thanks to a vigilant passenger and a driver who evacuated his bus seconds before the bomb went off; a missile from Gaza that landed harmlessly in a field; rockets fired into Northern Israel from Lebanon. This is the stuff of daily life in Israel, normal in a way snow is not. Were these isolated incidents or an escalation that will provoke a military response that may or may not cause further escalation? What would all this mean for the peace process that US Secretary of State John Kerry, who was about to arrive in Israel, is pursuing with such determination?

During my second week in Israel, the snow gone from streets and sidewalks in Jerusalem, peace and the absence of peace once more dominated headlines and conversation. “Why is it that no one here seems to care very much about Kerry’s initiative?” a friend asked the group at dinner after my first Shabbat in Jerusalem. “Is there really no chance it will succeed?” The politicians, pro and con, are keeping a low profile, for the most part; if the terrorists think there is a real chance for an agreement, bombs and missiles will likely increase in an effort to derail the process and so far that has not occurred. Extremist Israelis opposed to a two-state solution are behind the “Price Tag” movement to which Barnea referred in his column: vigilante actions designed to make sure that innocent Palestinians “pay a price” for every past, future, or contemplated attack on Israeli Jews, the price being fires set in mosques, slashed tires and broken windows, and other sorts of intimidation. My friend Gadi has formed a counter-organization that responds to the “Price Tag” gangs with visits to the victims and reassurance that Israel is a country of law and compassion rather than lawlessness. Everyone I spoke to seemed agreed that some sort of accord with the Palestinians is necessary, but disagreed profoundly on whether it is possible. Little had changed on this front since my last visit a year ago.

If anything, positions on both sides have become more strident. The minister of defense gave a speech the other day in which he declared before a group of businessmen meeting to advance the peace process that “Anyone who thinks Israel has a partner for a two-state solution is deluded.” An editorial in Haaretz responded by mocking the notion that Palestinian leaders who fail to back the Netanyahu government’s plan cannot be a partner to peace: “Those who do not succeed in getting their hands on the ‘Price Tag’ gangs say there is no partner; those who will open bids this week for building 1400 new apartments across the green line say there is no partner.” Israel released 26 Palestinian prisoners during my visit—including some convicted of murder—as part of the peace negotiations. The names of the Jews they killed were read aloud on the radio, one by one. I could not help thinking that this, too, is part of Israeli reality nowadays. The moral quandaries and calculations of risk are truly awful. How many Israelis will be killed and maimed by the murderers set free that day? How many deaths will be averted if peace is finally achieved by the process that includes this release of prisoners? Will that process be set back by the additional settlement building announced a few days ago? How can one decide?

One of the things I love most about Israel is that—despite or because peace has proven so elusive—love of the country translates, time after time, into optimism made effective by creative initiatives to make things better. One of my friends has formed a thinktank that gathers Israelis of diverse backgrounds to talk past the standard positions of “left” and “right” and “center.” Politicians associated with the group enjoyed marked success in recent elections for city council seats around the country. MK Calderon, in addition to bridging long-standing divides between Hilonim (secular Israelis) and Haredim (ultra-Orthodox Israelis), is trying to deal with Bedouin issues in new ways. Almost everyone I met seemed to be active in some cause beyond the normal concerns of work and family. The day before leaving Israel, I joined a group of Ashkenazi and Sephardi “religious” and “secular” leaders from across the spectrum that meets every two weeks so that its members can pray and talk about prayer. New minyanim seem to form all the time, including in “secular” Tel Aviv. The highways are more crowded than ever. So are the roads to Judaism. This is a country on the move.

I brought Ari Shavit’s best-selling book on “the triumph and tragedy of Israel” with me to read from inside his and My Promised Land. I will discuss the book in some detail in a future blog. But I can say without hesitation, walking the streets of Israel, talking to Israelis and Americans and the Americans who have become Israelis that “tragedy” seems entirely the wrong word to use when describing Israel—in part because Israel’s “triumph” is so nuanced, so solid, so human. Little is black or white. Gray is not a bad shade at all for a country that has achieved so much against all odds and therefore takes nothing for granted. Normal is big news here, almost as big as snow. It too shall come.