The Importance of Race, Faith, and Dialogue 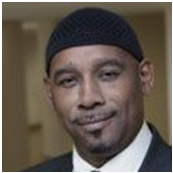 For Rev. Johnny Bush, an African American Baptist minister, speaking about race and ethnicity with students is deeply personal; he believes it is fundamentally important to their training as clergy or chaplains.  He wants students to acknowledge his skin color is different. “As noble as it sounds for people to think and say, ‘I don’t see color, everyone is the same for me’, that is quite dismissive to me. I want you to see me. All people are not the same,” he says.  And they’re not treated the same out in the world, he says.

Rev. Bush, who is the chaplain educator at Westchester Medical Center, also teaches a seminar called “Race, Faith, and Dialogue” to the clinical pastoral education students at JTS.

Rev. Bush, co-chair of the Racial Ethnic and Multicultural (REM) committee for the Association for Clinical Pastoral Education, is keenly aware of the unusual experience for students at a Jewish seminary to be taught by an African American male, and he brings that to his teaching. Rev. Bush wants his students to understand concepts of providing spiritual care to people like him. “If you’re the chaplain, how would you care for a person who has been wounded by racial discrimination or where their narrative has included oppression?”

He begins by sharing his own personal story and says, “This is where we start teaching ministry—it begins with self.” He tells the students that he was born in a black hospital in Columbia, South Carolina, and that his birth certificate says he was a black baby boy born to colored parents. And, in turn, he teaches that it is very important for the students to know who they are, where they come from, and how they became who they are.

Especially given the current political climate, Rev. Bush gives students an opportunity to have a more conscious and explicit conversation about how we understand race and ethnicity, and to consider these as an aspect of spiritual care. He hopes this will make the students more culturally or racially sensitive and aware—and will move them to exhibit humility with others.

He shares a story of an African American woman who was married to a man of color whose skin looked white. One day, her husband was having a heart attack. The ambulance driver brought him to the white hospital (in South Carolina at that time there were separate hospitals). When the woman arrived, the emergency room doctors were helping her husband. As soon as they saw the color of her skin and heard that her husband was really a man of color, they stopped and put him in an ambulance to go to the hospital that treated black patients. The man died on the way. Fast-forward many years later: this woman’s son was brought to this same hospital that used to be for white patients only. When she arrived, she was very upset and demanded that her son be released. She said repeatedly, “They are going to kill my son.” Nobody knew why she was saying this. What Rev. Bush doesn’t tell his students at first is that the woman was his mother. At that time, he adds, he was working as a chaplain resident in that very hospital and witnessed his mother’s reaction. He did not know what she had been through years before and learned it at that moment.

After he told this story to last summer’s CPE students, he asked them to share their feelings. Some students said they were angry; some said they were sad. Third-year rabbinical student Maya Zinkow said she felt ashamed. Rev. Bush used this as a teaching moment and explained that shame is not a connecting emotion in the same way as anger or fear. Maya reflected that he helped her to see that “Shame makes you shrink into yourself.  All you can do is wallow in it. But expressing connecting emotions instead of personal shame allows you to work together with another person in that moment. That was a powerful lesson in caregiving for me. “

Often the students want to talk about solutions to injustice; they feel they must do something. Rev. Bush asks them if they are there to find solutions or to make the patient’s experience better. He tells them, “You can’t fix people, but you can start by hearing and acknowledging their pain. That’s powerful . . . that they are heard is a type of acknowledgment and validation alone. It’s all about learning how to listen and trusting the value of story listening.”