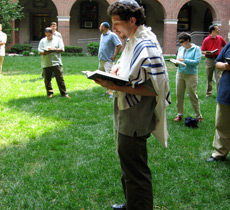 Prayer and Learning in the JTS Courtyard

I spent much of last week in the company of about 70 Conservative rabbis—participants in the annual workshop sponsored by JTS that is known informally as “rabbi camp” and formally as RTI, the Rabbinic Training Institute. The schedule includes text classes in the morning offered by faculty from JTS and other institutions (I co-taught a course with Rabbi Gordon Tucker on the nature and authority of mitzvah and halakhah). In the afternoons there are professional skills workshops offered by experts in the relevant fields (e.g., psychology or management). The evening program features small groups aimed at spiritual growth and intensely personal discussion. There is a lot of study, eating, praying, and talking, interspersed with a little exercise or rest. I don’t know how the rabbis felt about RTI this year (buzz was good, I think) but I know how I (one of the few non-rabbis on the premises) felt about it: energized, inspired, and more confident than ever about the future of Conservative Judaism.

The two major reasons for that optimism are the quality of the young rabbis who were there—recent graduates of JTS and the Ziegler School of Rabbinic Studies of the American Jewish University in Los Angeles—and the mentoring that these young rabbis get from more seasoned rabbis who are likewise an impressive group. The latter have been around the block more than a few times with synagogue dilemmas, communal issues, and religious angst. They nonetheless retain a great deal of joy in what they are doing and maintain the belief, humbly held, that rabbinic work serves the Jewish people, the cause of Torah and, yes, God.

I like hearing the way Conservative rabbis speak about all three of those subjects. No posturing, minimal defensiveness, and few illusions about what is not working in the synagogues, schools, or communal organizations that employ them. The rabbis I meet at RTI and elsewhere exhibit a real sense, in the best sense, of calling or vocation. They know enough about budgetary realities not to risk extravagantly on pie-in-the-sky dreams. They love Jews and Judaism enough not to cease dreaming or to rest content with anything less than excellence. At RTI, rabbis exchange good ideas with one another (and with me) about good things they are doing or hoping to do for and with the Jews they serve. These ideas are matched in my estimation by the skill and determination needed to accomplish them.

I value the rabbis’ achievements all the more because—let’s face it—rabbis do not have an easy job. There was not a lot of kvetching at RTI (though I picked up some weariness with budget shortfalls and anxiety about lay-offs by boards that in some cases seem to focus on the bottom line rather than the quality and devotion of their leaders). The demands on rabbis—especially but not only in synagogues—come from many directions and on most days come without pause. Rabbis have to provide pastoral care and many other kinds of care. They have to attend more meetings each week than many business executives and still manage to give good sermons regularly and produce good programs all the time. They have to be good with young people and old people alike; be good at inspiring, teaching, managing, and fund-raising. Indeed, good is rarely good enough in any of these areas. Synagogue members, like college students attending Hillel or parents sending kids to Jewish schools, decide at least once a year and sometimes more often than that whether they want to keep coming or go elsewhere. Given that reality and the perennial need for members, the standard to which rabbis are accountable is not goodness but excellence. There is little room for failure.

Why then choose this career as a young person or cling to it with true enthusiasm in middle age? Because rabbis have a chance to help people when help is most needed and to offer guidance that influences the course and quality of people’s lives. Rabbis have seen people make profound turnings in their lives and seen themselves play a part in those life-restoring moves. They get great satisfaction from building communities and filling those communities with meaning, celebration, and joy in the life of Torah. Rabbis love learning—this is obvious at RTI—and the rabbinate gives them the chance to teach and learn the sources they love; not infrequently, they have the added satisfaction of watching the light come on in students’ eyes in the course of learning, whether those students are 13 years old or 43 or 83. I enjoyed seeing the light in rabbis’ eyes as they delved into texts and issues about which they care deeply—or reported on experiences of learning with professors who once taught them at JTS or Ziegler.

One of the highlights of RTI for me was a set of conversations with newly minted rabbis already sobered by the realities of the profession but still excited by what they can achieve or already have achieved. One told me proudly of a trip with teens to Israel; another about new outreach initiatives at his campus Hillel; a third about a course he is putting together on Judaism and science. I confess that my greatest satisfaction came from the quality, honesty, and passion of discussion in my classes with rabbis of all ages about issues with which these men and women have wrestled long and hard and that for them—as for me—go to the very heart of what they believe and practice. The rabbis’ love for Torah is palpable. More than once I was stunned by insights that cannot be produced by book learning alone. Years of “fieldwork” experience are required. The same is true of moving tefillah. The Conservative rabbinate remains a profession in which wisdom counts for a lot. At RTI there was a lot of wisdom on display.

Not every rabbi I encountered there was equally impressive, of course. Not every rabbi inspires equal confidence or has the confidence in himself or herself that I wish all possessed in great measure. Some seem beaten down a bit by experience; temporarily, I hope. But for most of them the sparks still fly—particularly when, as at RTI, they are removed from the suit-and-tie world, placed in the company of old friends or new colleagues just starting out, seated at tables where discussion of Torah is animated (and includes Torah’s relation to politics, science, TV comedies, and NFL playoff games). Rabbis are generally happy with the path that they have chosen, the path that—they will tell you—chose them. I too am happy at this match.

That’s why I left RTI saying: this Conservative Movement of ours is going to be fine and more than fine. Its future is promising because its achievement continues to be remarkable. One major achievement sat all around me last week. To attract men and women of this caliber to the Conservative rabbinate and keep them there is reason for confidence that good things are in store for the communities they guide and serve.