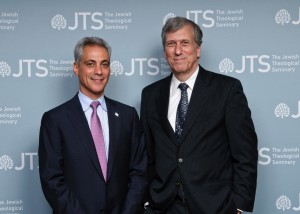 Children of Israel have not always been kind to their leaders. In last week’s parashah, Aaron and Miriam complain about Moses’s marriage and his unique relationship to God. This week, we read about the gloom-and-doom report of the spies that thwarts the plans laid by God and Moses for conquest of the Promised Land. Worst of all, perhaps, is the full-scale rebellion fomented thereafter by Moses’s cousin, Korah, and 250 of the tribal princes. “You have over-reached,” Korah tells Moses. “All the people are holy.” God has to intervene in every case—and in other cases too—to establish authority and restore order. Such tales are immediately recognizable to leaders of any sort in any age among any people. The Torah’s first lesson to prospective leaders seems to be that popularity and leadership rarely go hand in hand.

I’ve had numerous occasions to reflect on leadership in the past few weeks. The Commencement at The Jewish Theological Seminary sent 103 future lay and professional leaders out into the world bearing talent, idealism, and heartfelt hopes for their success. Several of the women recently ordained as rabbis by JTS have shared their concerns in this blog space about unequal working conditions, respect, and prospects. I have held dialogues about leadership with the governor of Michigan and the mayor of Chicago. Hebrew Union College President David Ellenson and I spent a moving evening in conversation with fourth-year rabbinical students from our two schools that have studied and acquired professional skills together over the past three years, thanks to a grant from the Schusterman Foundation. And, of course, I got to visit the White House on May 29 to speak with a president under siege from many quarters, including Jewish quarters. I thought of Bemidbar (In the Wilderness) and Moses at that moment—and wondered if the President did too.

This post introduces a series of blogs that will be devoted to the nature and dilemmas of Jewish leadership. My concern today is a pair of issues that come up all the time in the voluminous (and far from unanimous) literature on leadership, and bear special importance for Jewish leaders: (1) the need to have and display integrity (i.e., to know who you are, know what you stand for, and never to depart from those commitments), and (2) the difference and connection between management and leadership.

I will begin with the latter distinction, which happens to be the subject of a smart piece in the June 2012 issue of the Harvard Business Review by Michael Watkins. The move from management to leadership, Watkins writes, requires “seven seismic shifts of perspective and responsibility,” most of which involve the move from small to big picture thinking, part to whole, short- to long-term planning, and the like. John Kotter takes a somewhat different approach to the distinction in his piece, “What Leaders Really Do,” originally published in 1990. Managers cope with complexity, order, and status quo consistency; leaders deal with change, uncertainty, the future. Managers plan and budget, leaders set direction and offer inspiration and vision. I find the manager/leader contrast extremely useful indeed. I have experienced it from the inside in my attempt over the past five years to change elements of the culture and direction of JTS. That task has challenged me to think long-term, keep the big picture in view, and do my best to motivate and inspire JTS’s diverse constituencies.

But something troubles me about the distinction, I confess. One can push it too far, put too much value on change, and fail to appreciate existing beliefs and practices. Rabbi Ami Hersh, a JTS alumnus and a winner in this year’s Jewish Futures Competition for innovative leaders, recently reminded me of this when he said, “Sometimes people feel that in order to be innovative and creative you need to be part of a startup . . . there are ways to do that within an established organization.” The great sociologist Max Weber put too much emphasis on change and ascribed too little value to continuity in his famous distinction (which bears a close family resemblance to the contrast between management and leadership) between two “ideal types” of authority. “Traditional”authority is identified by Weber with rote habit, conformity, and “the eternal yesterday.” “Charismatic” authority insists on going its own way in the face of the existing order and getting others to follow. “Here I stand,” declares the charismatic leader, “I can do no other.”

There is something “un-Jewish” about this dichotomy, I believe—no coincidence, given that it derives from Protestant polemics against Judaism and the Catholic Church. I call it un-Jewish because Israel’s prophets, kings, sages, tzadikim, and lay leaders—no matter how charismatic or innovative—never advocated rebellion against inherited belief, law, or ritual. Confronted with radical change in the conditions faced by observant Jews, our leaders sometimes pressed in one form or another for change in the ways that Jews served God and Torah. They also insisted upon faithful continuity in that service. Our prophets would never have come out in favor of “sovereign selves” who declare—as a matter of course—that they “can do no other,” obey no established order, submit to no text or history. We have, time and again, overhauled existing institutions and created new ones. But we are here to tell the tale, when other ancient civilizations are long gone, because our leaders respected continuity as well as change; short-term, small-picture, problem-solving management as well as long-term, big picture, posing-new-questions change.

Solomon Schechter, addressing the JTS graduates of 1912, declared that “humility and self-sacrifice” were the essential qualities of the rabbinate. He did not like the idea of Jewish leaders deciding whether they were bound to tradition, precisely because he himself, as the leader of Conservative Judaism, urged careful change in Jewish tradition. Leadership is about service, not about the leader. Change is never for its own sake, never a “positive” in contrast to a “negative” status quo, but rather an attempt—grounded firmly in past changes—that, like them, is aimed at preserving and strengthening tradition.

Jewish institutions and organizations today require a massive dose of change, to be sure. But they also depend upon established institutions that have known how and what to change (and not to change) over the course of many decades and, in some cases, many centuries. The balance between the two is everything. We need leader-managers and manager-leaders, serving communities—whether synagogues or schools, camps or Federations, youth groups or senior centers—that seek the proper balance between continuity of the status quo and constructive disruption of past practice. Jewish leaders must be schooled in the difference between what must be changed, in order to keep tradition vital or community compelling, and what must not change, lest all that we Jews stand for ebb away with the tide. This combination of skills is basic to Jewish leadership in our day—and has been true of Jewish leadership in many times and places. It requires not only humility and self-sacrifice, but great learning: knowledge of where Jews and Judaism have been and should be going.

The urgency and difficulty of striking that balance make integrity a crucial component of Jewish leadership. It’s not just a matter of authority (i.e., our desire to do the right thing as Jews and our need to trust that our leaders care about standing upright before God, Torah, and Israel). There is a practical requirement for integrity and honesty as well. Things are moving fast. The ground seems to be shifting under our feet. No institution or organization can carry on the way it has for many decades. In such a situation, we need leaders who do not choose direction by holding a finger in the air to see which way the wind is blowing—the very definition of following, not of leading. (How do we know that Saul was a bad king? asks the Midrash. Because no one objected to his rule. He was very popular.) Nor can we put our trust in leaders who zigzag in response to circumstances, listing left and then listing right, drawing sometimes on thismodel from Jewish texts or history and sometimes on that model. A leader must come to the decisions that confront her armed with in-depth knowledge of Jewish texts, Jewish values, and the Jewish past. She must be a Jewish self, confident of who she is and where she stands.

Put another way: leaders must be predictable to themselves and to their followers. The rank and file members of Jewish communities and organizations must be able to take independent and creative initiative, knowing that their leaders will support them because they are walking further along the path the leaders have charted. The Midrash contrasts Noah, who “walked with God,” to Abraham, who “walked before God.” We want children, students, and followers, who, like Abraham, take our paths further than we could walk or imagine. Indeed, we want leaders who listen to and learn from followers, we want a shared process of mutual advancement rather than a top-down approach of wise-leader-dictating-to-submissive-followers. This, too, requires shared commitment: leaders with demonstrated loyalty to the normative agenda of the community. Jewish has to be more than an adjective describing the faith or ethnicity of the leader of a community. It must describe the cause we serve and the way we serve it.

The mayor of Chicago and the governor of Michigan belong to different political parties and exhibited very different body language and rhetorical styles when they spoke with me about leadership. They are active members of different religious groups. But both stressed pragmatism over ideology; compromise and conversation, rather than partisan fights to the finish; continuity as well as change. And both spoke about the need for integrity and truth-telling from political leaders and every other kind of leader. Jewish institutions need leaders and followers of similar commitment. Given where things stand with us in 2012, we really can do no other.