Hanukkah Miracles at the White House 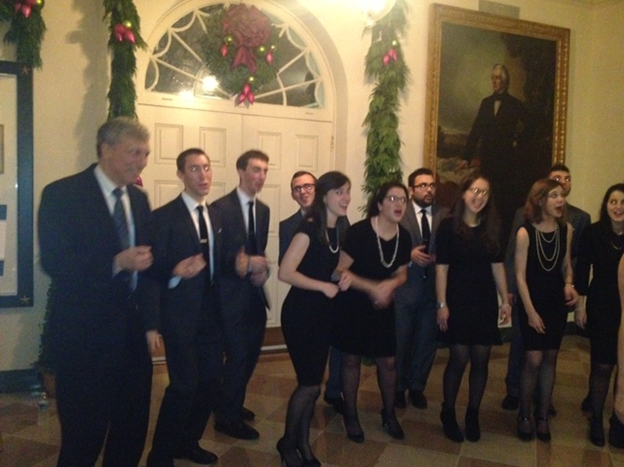 I was puzzled when I received the invitation from the President and First Lady to celebrate Hanukkah at the White House last Thursday evening—hours after the holiday would have ended. How would they handle this awkward ritual conundrum? Would a ninth candle be added for the occasion? Would the ubiquitous and lovely Christmas decorations be complemented by an electric menorah lit the night before and kept burning for the extra day? Perhaps there would be latkes and lamb chops on the table, but no menorah in sight (the White House is known for its kosher lamb chops, and its staff is probably aware that far more American Jews consume latkes these days than light Hanukkah candles). The solution arrived at was ingenious: the President offered brief remarks, the blessing that commands Jews to light candles on Hanukkah was omitted, a rabbi recited the blessing that thanks God for the miracles performed for our ancestors and for us, and then the group joined in a heartfelt sheheheyanu thanking God for enabling us to reach this moment. Eight candles were lit. We sang Ma’oz Tzur. Synagogue ritual committees, take note: this night of Hanukkah was wonderfully different from all others—and the innovation worked.

I found the ritual moving (and, judging by the mood in the Grand Foyer of the White House, I was not alone). It captured something both deep and joyous, enabling those who participated to step out of that particular moment and that very special place—or, better, through them—into Jewish and American centuries past and future, and even to approach the precincts of eternity. The journey was made more meaningful by having two survivors of the Holocaust light the candles, using a menorah that itself had survived the Shoah. My personal joy in the occasion was increased because the blessings were recited by Rabbi Joshua Sherwin, a graduate of The Jewish Theological Seminary, whose father and grandfather were also ordained at JTS. I suspect that everyone in the room was touched when our nation’s first African American president drove home the universal import of the Hanukkah story with a memorial tribute to Nelson Mandela, who had passed away a few hours earlier. No one in our time has testified more eloquently than Mandela to the power of the idea of freedom, a major theme of the Hanukkah story. Few have so dramatically moved from darkness to a great light.

The meaning of the ritual for me lay above all else in the simple fact that the congregation—American Jews of all denominations (or no denomination), ingathered from all parts of the country, comprising men and women of all ages and both political parties, among them three Supreme Court justices, a Secretary of the Treasury, and many members of Congress—were in that room together, feeling at home in our nation’s home, marking Jewish time there, joining loudly in the blessings, and giving that especially rousing rendition of Ma’oz Tzur. That got my heart pumping and set my mind thinking about how unique the American experience has been for Jews. The nation’s founding father had proclaimed, in his famous address to the Newport synagogue in 1790, that he was not there to offer toleration to the Jews of America because, as citizens of the United States, they had as much right to its liberties and benefits as he did. Now here we were, almost 225 years after George Washington’s declaration, and nearly 70 after the latest attempt to destroy our people and our faith, taking full advantage of the opportunities available in this unique and blessed country—and doing so unmistakably as Jews. ‘Am Yisra’el chai! That’s what I heard in the robust recital (from memory, no less) of Ma’oz Tzur. We are Jews happy with our lot. Against the background of Jewish history, ancient or recent, this surely counts as a great miracle.

I heard two other messages at that moment as well, both of them intended as much for the President as for the Jews in the room. We wanted the President to know—or, better, never to forget—that the incredible achievement and dedication represented in that room is powered in part by Jewish history and Jewish commitments. Those three Supreme Court justices—and many others with them—respond to the Jewish imperative to pursue justice. The Jewishly learned and observant Secretary of the Treasury knows full well that he stands in a line that goes back to the story of Joseph in Egypt (recounted in last week’s Torah portion). And this same group of Jews cares passionately about Israel and is deeply concerned about the Iranian nuclear threat. The President alluded to Israel and the Iranian situation in his remarks, acknowledging that he understands the relationship between the community’s commitment to social justice in America and its commitment to a strong Israel. Hanukkah has lessons to teach on both counts. Jews have absorbed those lessons over the centuries and are proud to affirm them at the White House.

Perhaps the President, not exactly in the pit these days but also not at the height of popularity or accomplishment, took comfort in the stories of the Maccabees overcoming all odds or Joseph saving Egypt and his family from famine. If so, all the better. Hanukkah lights are meant to shine forth to all who see them, publicizing the miracles to which they testify. I went down the grand staircase, serenaded by Pizmon—the JTS-Columbia-Barnard a cappella group—reflecting contentedly that the presence of Jews and Judaism at the White House is now routine. Miracles never cease, as the Sages taught long ago, and this is one that I got to witness with my own eyes.