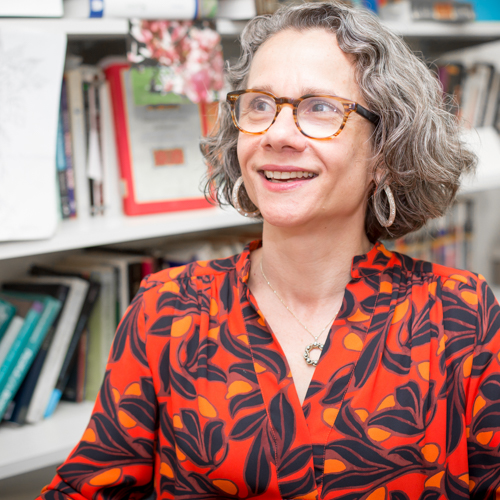 In the course, “The Character of God in the Bible,” she doesn’t try to rebut the accuracy of God’s famous negative attributes. “It’s not that I don’t see that as being part of God’s character, but it’s not all of it,” says Dr. Kalmanofsky, Blanche and Romie Shapiro Professor of Bible and dean of JTS’s undergraduate List College and Kekst Graduate School.

Can the Bible’s God be angry and violent? Yes, she says, but there’s a context to that behavior. In the Torah, God has real relationships with people and reacts to what they do. “Human beings can impact God, and the fact that God becomes angry shows that God can suffer. I feel the God of the Bible reflects a vulnerability.”

But the “Character of God” course is more than an apologia for the behavior of the biblical God. Students, who range from undergraduates to graduate students, are expected to read Biblical texts and commentary in their original language, to approach them as critical scholars, and to understand the Bible’s God historically in the context of other gods in the ancient world. As a longtime feminist scholar, Dr. Kalmanofsky also asks them to look at God through the lens of gender and sexuality and to read modern scholarship exploring those issues.

Ultimately, studying what the biblical God does and says, and God’s relationships with human beings, is a good way to understand biblical theology, Dr. Kalmanofsky says. It also gives students a foundation for wrestling with their own beliefs about the Bible’s meaning for themselves and contemporary Jews. For Dr. Kalmanofsky, that additional question of religious meaning is the hallmark of a JTS education.

“Text, context, and meaning—that’s what we try to teach here,” she says. “I want my students to be in relationship with this material, not as an artifact but as a living text.”