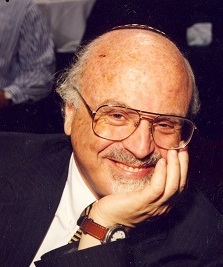 Rabbi Neil Gillman, who died on November 24, 2017, was a major presence at JTS for more than half a century. He was a beloved teacher and colleague, whose lucid writing and philosophical insights profoundly influenced Jewish theology in the contemporary world.

A native of Quebec City, Rabbi Gillman graduated from McGill University in 1954, was ordained at JTS in 1960, and received his PhD in philosophy from Columbia University in 1975. He was the author of several books, including Sacred Fragments: Recovering Theology for the Modern Jew (winner of the 1991 National Jewish Book Award in Jewish Thought); Conservative Judaism: A New Century; and Doing Jewish Theology: God, Torah, and Israel in Modern Judaism.

At the time of his retirement, Rabbi Gillman was the Aaron Rabinowitz and Simon H. Rifkind Professor of Jewish Philosophy. To honor his long and distinguished service to JTS, he was awarded the degree of Doctor of Hebrew Letters Honoris Causa in 2005.  Rabbi Gillman’s passing elicited many eulogies and remembrances, some of which are collected here.

We invite you to share your memories of Rabbi Neil Gillman and to read the memories of other students, colleagues, and friends.

I am proud to be a student of Neil Gillman’s. Many of us in this room are students of Neil’s, and many of us could be speaking about the amazing experience of being Neil’s student.

I learned from Neil in three places:

“What Neil really worried about was whether we, all of us, each and every one of us, were grappling with the theological issues with which rabbinic education at The Jewish Theological Seminary was confronting us.”