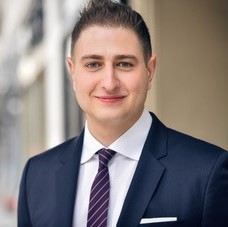 The road to graduation isn’t always straightforward. But sometimes it’s the unexpected detours that give an education meaning. Just ask Benjamin de Toledo. Growing up highly involved in Los Angeles’s Jewish community, List College was a logical next step. Once Benjamin arrived, though, he realized there was more to experience before settling into an educational path, and opted to take a leave of absence to broaden his horizons. He first worked as a Jewish Experiential Nature Education Fellow at the American Jewish University in Simi Valley, California, and then participated in the immersive Kivunim: New Directions gap-year program, which combines academic study in Jerusalem, travel, and cross-cultural interfaith dialogue.

He returned to List with newfound focus and began volunteering at The Shefa School, a Jewish day school for students with language-based learning disabilities. In 2017, he was awarded the JTS Alumni Association Education Scholarship in Honor of Sylvia Ettenberg Award, given to an outstanding student planning a career in Jewish education. What’s next for Benjamin? With a BA in Jewish History from JTS and a BA in Sociology from Columbia University, he plans to study in Israel at the Pardes Institute of Jewish Studies. His goal is “to make Judaism more lively, relevant, and accessible to Jews of all backgrounds.”