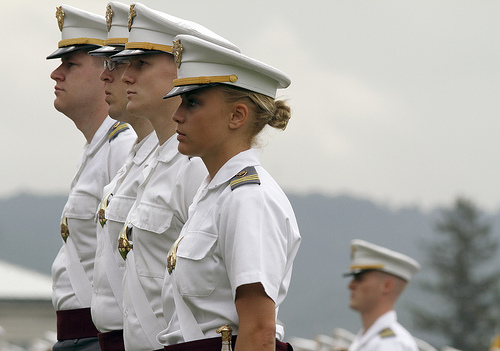 I spent a day at West Point last week—meeting Jewish and non-Jewish cadets, seeing the sights, talking about leadership education with administration and faculty, and teaching a class about Judaism, the distinctive pattern of religious belief and practice in America, and the role of religion in stimulating and sanctifying violence—and in eliciting and sanctifying compassion. It was a powerful experience—rendered all the more so for me by the fact that it took place on the anniversary of Kristallnacht and—according to the Hebrew calendar—of Yitzhak Rabin’s assassination. Several moments in particular stand out in my memory.

I think I will not soon forget them.

First, the collective picture of the cadets: young, very young; dressed identically in grey uniform, hair on the men cut short (17 percent of the cadets this year are women); non-stop salutes to my host, Major Kirkpatrick, and every other officer who came within their vicinity, even while jogging; the way they stood at attention when their teacher walked into the room, and began every answer to every question put to them with “Sir” (I could get used to this); their patient, silent sitting in the mess-hall, food before them, knives and forks at the ready, for as long as their superiors took for announcements; good-natured acceptance of the rigors of the Academy’s routine, both because they have no choice in the matter and out of real determination to stay with the program and serve their country; the fact that all were smart enough to be admitted and to graduate, and some were smart enough to excel anywhere; how young they were.

I liked the cadets I met—and therefore worried about the shadow of war that I saw hanging over their campus, even on a cloudless autumn day. When I visited the cemetery with the major who was my host in late afternoon, I asked if the students fully understand what they are facing after graduation. Most do not, he said, and we agreed that is perhaps a good thing. The major told me that of late far too many recent graduates were arriving home to West Point for burial, including a soldier who had deployed to the war and been killed within a year after graduation—and so was accompanied to the grave by classmates still in school. I shivered, and not because of the cold. I looked at the fresh faces before me with new concern. It reminded me of the teaching I had done at Tel Aviv University, to students just after army service, and before army service, and always bracketed by milu’im.

What did I want the cadets at West Point (and their teachers) to understand? That religion need not be a source or justification for violence, persecution, hatred, and terror but could be—and often has been—just the opposite; that America represents a precious experiment in this direction, one that we must all work to help succeed—for if tolerance and mutual respect are not possible here, in this country, where in the world will they be possible? And if they do not take root on this earth, threatened as it is on many fronts with harm or destruction, religion as it is a powerful force shaping minds and hearts, we are all in dire trouble. I began the class with George Washington’s remarkable letter to the Newport synagogue—that amazing moment when the president of the United States said something to Jews that they had never heard before from a Gentile ruler in all our history and have heard few times from powers on earth since: that it was “now no more that tolerance is spoken of, as if it was by the indulgence of one class of people that another enjoyed the exercise of their inherent natural rights.” Judaism has done its share to make the American experiment a success—and, indeed, has offered resources for the practice of pluralism that other faiths might do well to emulate.

I wanted the students to know all this, really know it; to hear it from me loud and clear; to have the message lend strength to an army in which Jews, Christians, Muslims, Hindus, and others serve side by side, aided by a military system in which chaplains of all faiths (like the able Jewish chaplain I met at West Point, a graduate of Yeshiva University) minister to soldiers of all faiths.

I wanted them to understand one thing more: that many of us care deeply for their welfare, are grateful for their service, salute them for their courage, even if these sentiments often remain invisible. It bothers me, I told the major, that there is so little interaction between civilians and the military in our country these days. Not only do we have an all-volunteer army, rather than a draft, but that army is composed primarily of recruits from certain regions of the country, certain socio-economic backgrounds, even certain families. I have met soldiers, former soldiers, and very high-ranking soldiers in Israel as a matter of course, almost from my first visit as a student in the 1970’s. I met my first American military officer only a few years ago, when a visiting national security expert from Israel invited me to a conference at Stanford—where I had long served on the faculty—devoted to key issues facing the Western allies. Stereotypes abound, in both directions—just as they do among religious groups that know little about one another; high-ranking officers get tired of civilians’ surprise at how smart they are; the soldiers pay the price among civilians for being the bearers of unpopular and perhaps unwinnable conflicts—and so it goes.

The military needs more good Jewish chaplains. I hope JTS and the RA can help to supply them in coming years. If we are going to send men and women into combat, they need caring for, and praying for, and praying with. Washington’s prayer at Newport remains one to which we can readily say Amen. “May the children of the Stock of Abraham, who dwell in this land, continue to merit and enjoy the good will of the other Inhabitants; while every one shall sit in safety under his own vine and fig tree, and there shall be none to make him afraid.”